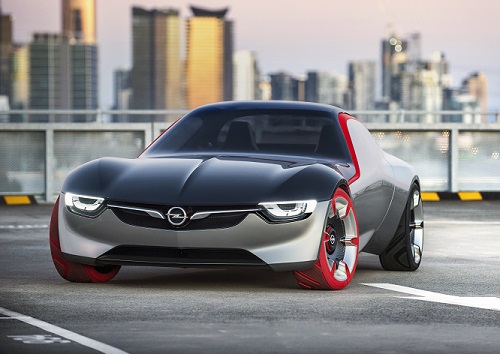 The Opel GT Concept will have its world premiere at the 86th International Motor Show in Geneva (3-13 March). This trendsetting sports car is an expression of the brand’s ongoing innovative potential.

A full-bodied sports vehicle with an engine placed behind the front axle and rear-wheel drive is the direct successor of the Opel GT and Monza Concept models and a new interpretation of the stylistic concept of the brand. 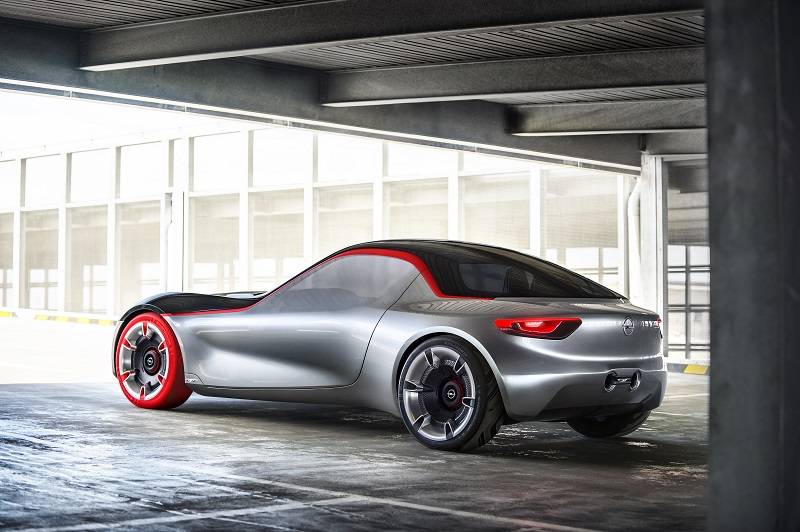 In the avant-garde, yet economical car silhouette, everything that could interfere with the pure form was abandoned. The GT Concept has no exterior handles, side mirrors or windscreen wipers.

He continues the philosophy of the Experimental GT model

At the Geneva International Motor Show Geneva GT Concept will follow in the footsteps of the famous Opel Experimental GT . In 1965., During the Motor Show in Frankfurt, Opel presented slender and expressive coupe, which uses reliable technology with Kadett B . The model was able to boast of many innovative solutions, such as concealable spotlights or slim and unadorned silhouette with perfect proportions. 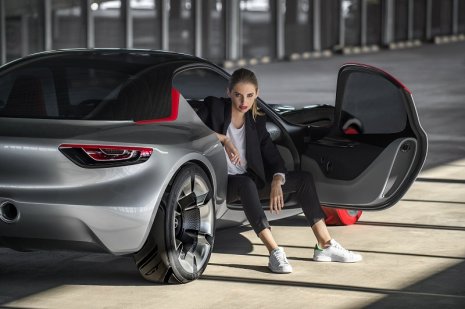 Dynamics GT Concept symbolizes the red line dividing the body horizontally and emphasizing its proportions. Red front tires – mounted on rims with a bold motif of roller skates – also refer to the motorcycle Opel Motoclub 500 , which in its time (1928) was also an avant-garde vehicle, equipped with red tires. Long engine cover, lack of tailgate, double exhaust with centrally placed tip and name referring to the original GT – in addition to these features, the car has no retro details.

The most important innovation in the Opel GT Concept is a large door with integrated side windows and a smooth transition between the glass pane and the painted surface. Both the driver and the passenger can enter a surprisingly spacious interior by pressing a touch panel controlling the electrically opened doors. There is enough room inside even for a tall driver. After opening 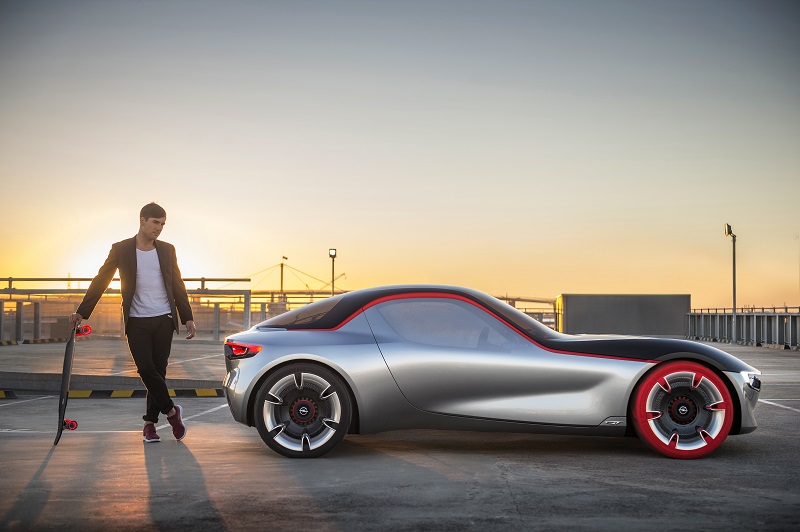 the door, they are strongly overlapping the front wheel arches.

The compact sports concept vehicle was designed for urban use. Two cameras mounted behind the wheel arches provide good visibility while driving through the streets of the city. The image from the cameras is displayed on two monitors on the left and right side of the cockpit. In this way, side mirrors and blind spots were eliminated at the same time. The windshield moves into a glass panoramic roof. 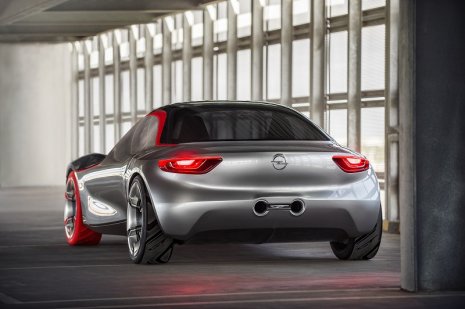 Under the spreading hood, the GT Concept engine is hiding: as in the first Opel GT and the iconic American sports model Corvette produced by GM, the engine is located centrally behind the front axle. The new model is equipped with a powerful, three-cylinder turbocharged engine with a capacity of 1 liter, based on the unit used in the ADAM, Corsa and Astra models . The gasoline engine develops 107 kW / 145 hp and a maximum torque of 205 Nm (the fuel consumption figures for the 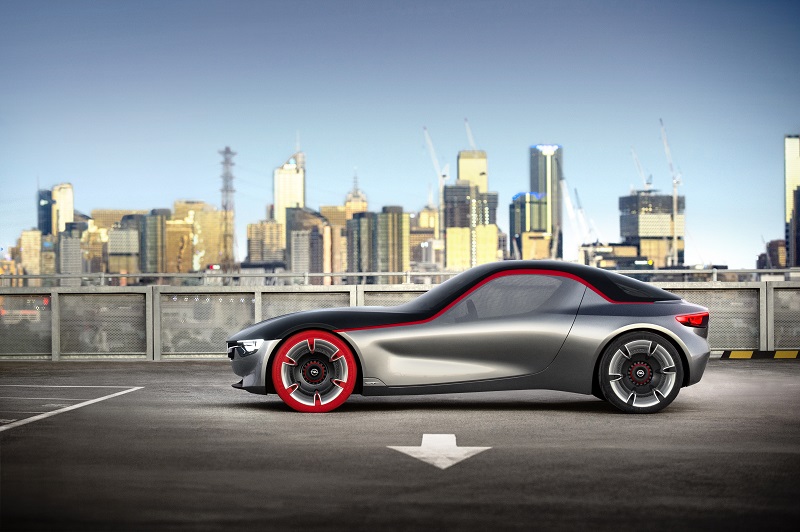 Opel GT Concept are not yet available).

Turbocharged power is transmitted to the rear axle with a mechanical differential lock via a sequential six-speed gearbox operated by steering wheel grips. The Opel GT Concept therefore has a traditional rear drive. The performance of a two-seater vehicle with a weight not exceeding 1000 kilograms will also not disappoint them. GT Concept accelerates from 0 to 100 km / h in less than 8 seconds and accelerates to 215 km / h .

Another highlight of the Opel GT Concept are headlamps with integrated direction indicators. Thanks to the super-modern projection technology, the effect of three-dimensional lighting were obtained in them. The solution is perfectly harmonized with adaptive, fully LED, new generation headlamps. Matrix IntelliLux LED headlamps have already debuted in the new Astra. The Opel GT Concept uses an improved version of this system. The three- 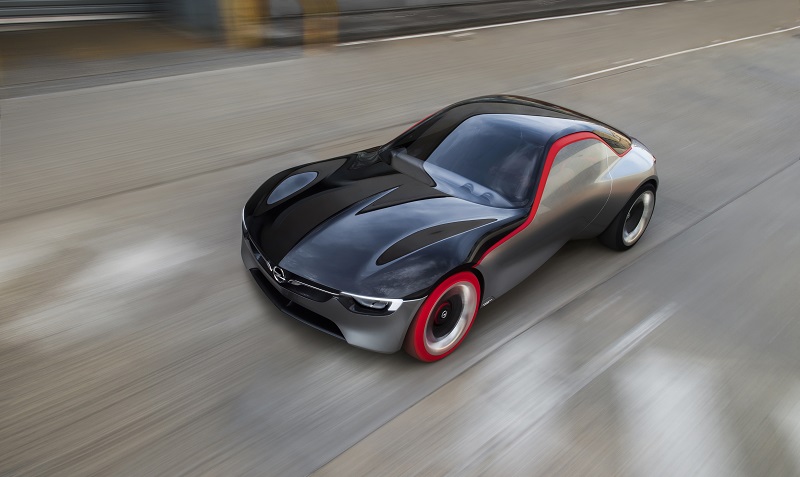 dimensional effect in the rear lights of the new GT gives the vehicle a unique look at night.