Created as a one-off by Porsche Classic to celebrate the brand’s 70th anniversary, “Project Gold” is the last 911 Turbo with an air-cooled engine. Built from a brand new 993 bodyshell, it’s coated in a Golden Yellow metallic paint that matches the 2018 911 Turbo Exclusive Series, complemented with black wheels and body accents. A brand new, 450 hp 3.6-liter twin-turbo flat-six engine was installed, delivering the performance the vehicle originally had when it was in production. The manual transmission and all-wheel drive were also sourced from the Porsche Classic range of genuine parts, and assembly of the car took over a year and a half. The car was sold at auction over the weekend, likely setting the record for a 993 with the final cost of $3.1 million going to benefit the non-profit Ferry Porsche Foundation. 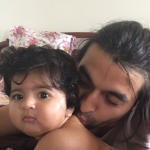 Launched Rezvani’s Superb Jeep; Bomb will not even be a gun